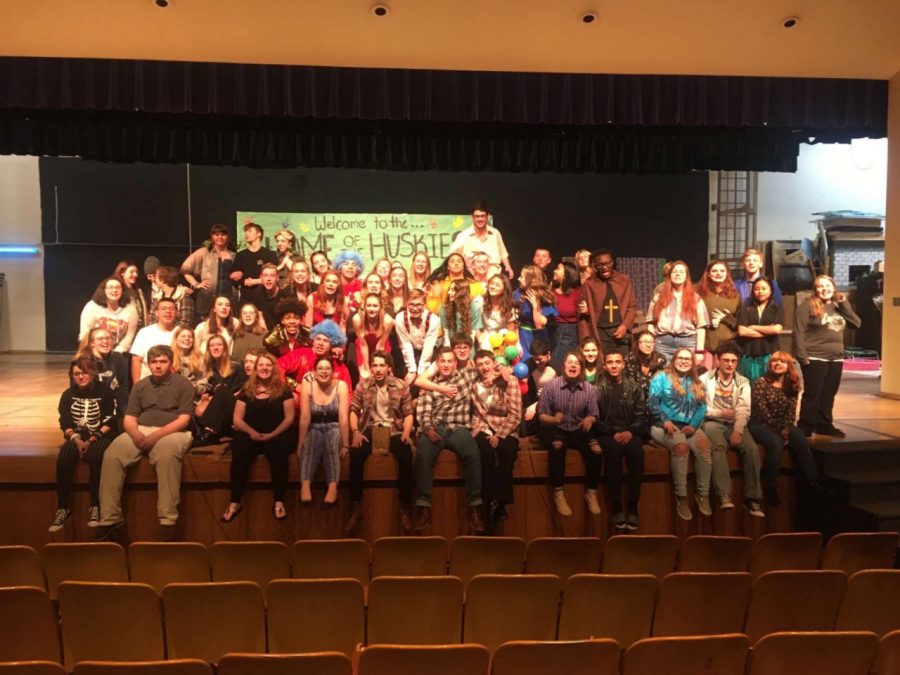 The 2020 casts and crews for the One Acts

Sports are of massive importance to those in the Spartan community. Just about anywhere you go in the school, you will undoubtedly hear about the upcoming game. It seems like everyone loves that, and there is genuinely nothing wrong with that. Athletics are an integral part of Doherty as a whole. However, not every student is involved in any capacity, with that specific department. Yet it seems like the administration, as well as those with higher positions in District 11 do not completely recognize that.

Despite the hours upon hours of work that those in the performing arts department put in, recognition tends to be a rarity. The marching band and choir kids are at nearly every Doherty sporting event to show support and perform, yet many of those in the athletics do not reciprocate this same effort.

The department barely receiving recognition seriously diminishes the importance of the department to students. This facilitates the notion that a career in performing arts is just a pipe-dream that should not be pursued. According to D11’s Graduation Requirements for the classes of 2021 and up, three physical education courses are required in order to graduate. Performing arts is not, however, a requirement. Granted, it is listed under the “Humanities,” credit, but that credit also covers, “English… and/or world language” credits under D11 Board of Education policy. A performing arts, meaning a theater and/or music credit, is not required in order for a student to graduate.

Performing arts, as a whole, is incredibly important. It allows absolutely anyone to participate, regardless of race, sex, creed, and disability. In subsections of the department such as music, members of the team do not need to speak the same language, as music can be interpreted as a universal language. While there are no specifically designed extra-curricular sports for those in the SPED program, both Mr. Reed and Mr. D. consistently go out of their way in order to let every student know that they are included. In fact, the SPED theatre class puts on a marvelous play every year of purely SPED students.

Soph Torres, a senior directing a one act at Doherty, firmly believes that theatre is monumental in the growth of a person because, “…it really is such a good place for outcasts, but not just… to [go, but] for them to… grow into cool people; once an outcast, never an outcast again.”

Theatre is a fantastic department to be apart of, as it both stimulates creativity in your brain, as well as allows one to express yourself in ways that really cannot be replicated anywhere else. Cole Russell, a sophomore who is involved in both choir and theatre, loves the department because, “[it] gives plenty of students the will to keep living.” In performing arts, there is always a place for someone to belong. Unlike certain sports where one can simply not be put on the team due to just not cutting it. If someone doesn’t make it into the cast, they are always given the chance to be in the crew and help run the show.

“Performing arts is important to me because [it’s the] study of people, and it helps… us understand our differences… and by doing that, we can… communicate better with people. In communicating better with people, we can solve problems. It’s not so much of a competition as it is studying the human condition and… making that human condition better for ourselves & everyone around us,”  says Mr. Reed.

“[Performing arts is] a different aspect of your life that you don’t necessarily get to tap into regularly… You don’t necessarily act in public, unless you’re a fake person… But like, [musically], some people are closet singers, some people are just open… [and] just like to perform all the time. Instrumentalists don’t necessarily go out and just play randomly… It’s a different side, we get to learn different things… It kinda ties in our left brain and our right brain together, and so we’re able to access both hemispheres, and I think it makes us more intelligent and better humans.” says Mr. Dicamillo, choir teacher at Doherty.

On October 21st, 2018, a water main break occurred inside of Doherty, which forced the administration to close school for a week in order to both handle the cleanup process and to replace the pipe. Due to the flood, the performing arts hallway suffered. A giant crack formed in the green room, and the choir room’s carpet was completely destroyed.

Not to undermine what happened to the gym, as the flood damage did expose mercury vapors, which lead to a 15-month hiatus from using the gym. However the music department didn’t see the same sense of urgency. When removing the asbestos from the band room, Doherty Choir’s $13,000 new cabinets were damaged, with no compensation. In addition, the green room’s floor was only very recently fixed, being as late as the week before D11 went on Winter Break.

Charlotte* was not happy with how the floor in the green room was fixed, stating that ” [it] was a [email protected]$ed job.” Only the part of the floor that suffered damage from the flood was fixed, leaving an uneven space in the floor, as well as a mismatched floor-scheme.

An incongruous floor pattern would never be in place in the gymnasium, which makes it all the more infuriating that the green room is not treated with the same respect. Finn, a huge contributor to Doherty’s performing arts program, is upset over many people not believing that, “the stage problem is not the same as the gym problem… [even though] the tile in the green room was closed for so long because it had asbestos underneath it, so [they] don’t think that it is analogous.”

Although the athletics department is extremely important and a huge part of the community here at Doherty, it is not the only department that should be recognized and respected. Many kids go unrecognized here, and it can lead to those kids in feeling that he or she is not good enough; performing arts gives those students a chance to feel like more than just a passing face. However, because of how underappreciated performing arts can be, many kids who do put themselves out there will still end up feeling unnoticed.

* Some members of the theater department have chosen to be quoted under a pseudonym.