A Teenager’s Tips on Avoiding Negativity 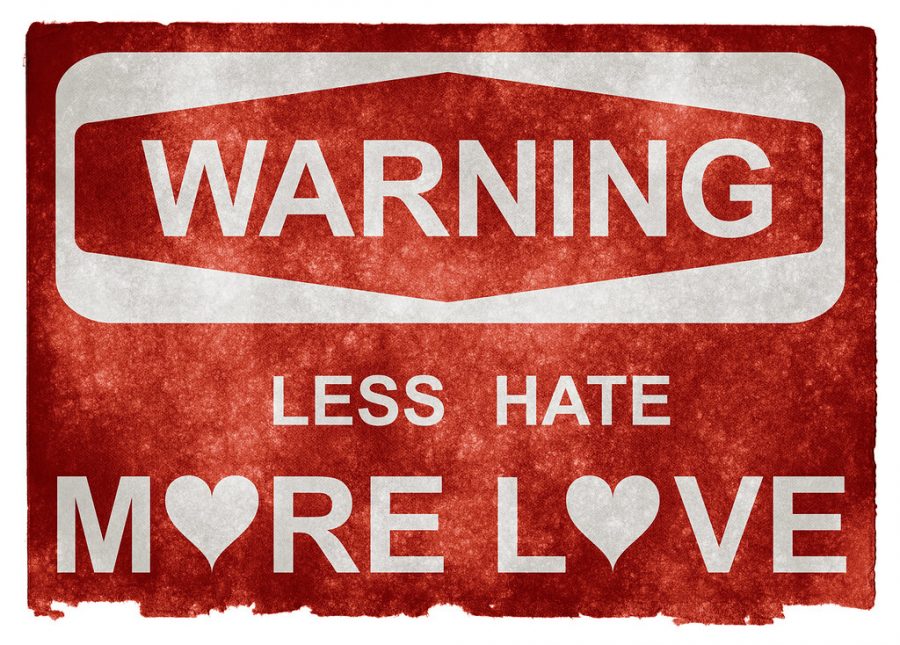 This road sign encapsulates Darius's argument that we should all live with less hate in our lives.

There is a lot of hate in this world and it is affecting this generation’s teenagers. A lot of this is due to bullying, jealousy, popularity, and status symbols.

Jealousy can cause hate in many ways. For example, if someone has a better girlfriend or boyfriend, if someone has a specific item, or someone else got invited to a big party. Doherty High School freshman, Madison Merrifield says, “The whole reason people have jealousy is because they see something in someone [that] they do not have.”

It is normal to be jealous but remember that no one’s better than anyone else just because someone has something you do not. That does not mean you have to hate them for it, you deserve the same thing just as well as they do.

Or even say someone took your girlfriend or boyfriend from you; that is their own fault. If your partner left you for some other person, obviously they did not feel the complete same way about you then you did them. It is their loss if they left you behind, and there is no need to be mad at the person who took them from you. You can do better. Believe in that. This is your life, you choose it, and you can move on and let it go. There is no need to look back on it forever.

Popularity can cause hate as well.  Doherty senior, Callie Frost says, “Popularity and labels shouldn’t exist because I’m friends with everyone. And everyone has different ways of looking at people. Like say you have a friend that you think someone might like more than you—that’s not always the case—it just means they have a different friendship or a relationship with that person because everyone’s different.”

Because you feel like someone is better than you at something, they have a lot more friends than you may have, better clothes, or whatever it is, there is no reason to hate someone because of their popularity. Yes, they may have more friends, but at the end of high school, are they really going to stick with them all that time? At the end of high school, everyone besides maybe a select few friends go their separate ways to get a better life.

At the end of the day, it does not matter who has more friends. We are all human and high school does not last forever. After that, if you hate a person, you are not going to have to see them again after high school. So why waste your time worrying about them now? My best advice is to focus on yourself, not others.

Status symbols are something that causes people to think they are better than someone because they have something another does not. Someone may have more money or certain clothes that make them look better. Or it just might be that they’re a higher level at something than others. If someone has a better or richer life, it does not mean your life has less meaning. Everyone is equal in life, and no one’s better than you are. People are never more or less capable than others, we just have better strengths in different subjects or areas, and that is ok.

Bullying is something nearly everyone has gone through. Bullying is caused by some people that are not always ok with themselves. Doherty High School counselor, Mr. Garland, said, “Hurt people hurt people.” When something went wrong with them, it inflicts their hate on a certain thing or person and pushes it onto innocent students.

To the bullies, I understand you are angry, but there is no need to push it onto other people. Just get help before things get worse, and then you will not have to push your anger onto others.

To the other kids, just remember you are better than whatever name they call you. You are your own person, and you decide who you are. Never forget that.

Social media can cause hate as well, due to opinions on different topics. What people see on social media and news also gives the young generation just one way to look at things. When people hear things in the media, it causes them to agree with that certain person because of who they are. If someone posts on their story and says something that they disagree with. They can go to the comment section and say something bad back, which will cause arguments because everyone else sees it. For example, if someone says something political on social media about a president they don’t like or disagree with, it can cause a loss of friendship. My best advice is to keep anything political and religious to yourself. This will prevent arguments and avoid conflict.

My point is to not spend life hating others. We only live one life, so spend your life spreading positivity and helping others instead of wasting your time hating and fighting with people. Those hateful days are ones you cannot get back, and it is a day wasted that you could have spent doing something good or productive. Let us bring hope and light back into this world and leave the earth as peacefully as possible.